People care less about large groups of people than individuals, per capita and often in total. People also care more when they are one of very few people who could act, not part of a large group. In many large scale problems, both of these effects combine. For instance climate change is being caused by a vast number of people and will affect a vast number of people. Many poor people could do with help from any of many rich people. Each rich person sees themselves as one of a huge number who could help that mass ‘the poor’.

One strategy a charity could use when both of these problems are present at once is to pair its potential donors and donees one-to-one. They could for instance promise the family of 109 Seventeenth St. that a particular destitute girl is their own personal poor person, and they will not be bothered again (by that organisation) about any other poor people, and that this person will not receive help from anyone else (via that organisation). This would remove both of the aforementioned problems.

If they did this, I think potential donors would feel more concerned about their poor person than they previously felt about the whole bunch of them. I also think they would feel emotionally blackmailed and angry. I expect the latter effects would dominate their reactions. If you agree with my expectations, an interesting question is why it would be considered unfriendly behaviour on the part of the charity. If you don’t, an interesting question is why charities don’t do something like this.

Poverty does not respond to incentives

I wrote a post a while back saying that preventing ‘exploitative’ trade is equivalent to preventing an armed threat by eliminating the ‘not getting shot in the head’ option. Some people countered this argument by saying that it doesn’t account for how others respond. If poor people take the option of being ‘exploited’, they won’t get offered such good alternatives in future as they will if they hold out.

This seems unlikely, but it reminds me of a real difference between these situations. If you forcibly prevent the person with the gun to their head from responding to the threat, the person holding the gun will generally want to escape making the threat, as now she has nothing to gain and everything to lose. The world on the other hand will not relent from making people poor if you prevent the poor people from responding to it.

I wonder if the misintuition about the world treating people better if they can’t give in to its ‘coercion’ is a result of familiarity with how single agent threateners behave in this situation. As a side note, this makes preventing ‘exploitative’ trade worse relative to preventing threatened parties acting on threats.

Generous people cross the street before the beggar

Robert Wiblin points to a study showing that the most generous people are the most keen to avoid situations where they will be generous, even though the people they would have helped will go without.

We conduct an experiment to demonstrate the importance of sorting in the context of social preferences. When individuals are constrained to play a dictator game, 74% of the subjects share. But when subjects are allowed to avoid the situation altogether, less than one third share. This reversal of proportions illustrates that the influence of sorting limits the generalizability of experimental findings that do not allow sorting. Moreover, institutions designed to entice pro-social behavior may induce adverse selection. We find that increased payoffs prevent foremost those subjects from opting out who share the least initially. Thus the impact of social preferences remains much lower than in a mandatory dictator game, even if sharing is subsidized by higher payoffs…

For some reason we hold those who trade with another party responsible for that party’s welfare. We blame a company for not providing its workers with more, but don’t blame other companies for lack of charity to the same workers. This means that you can avoid responsibility to be generous by not trading with poor people.

Many consumers feel that if they are going to trade with poor people they should buy fair trade or thoroughly research the supplier’s niceness. However they don’t have the money or time for those, so instead just avoid buying from poor people. Only the less ethical remain to contribute to the purses of the poor.

Probably the kindest girl in my high school said to me once that she didn’t want a job where she would get rich because there are so many poor people in the world. I said that she should be rich and give the money to the poor people then. Nobody was wowed by this idea. I suspect something similar happens often with people making business and employment decisions. Those who have qualms about a line of business such as trade with poor people tend not to go into that, but opt for something guilt free already, while the less concerned do the jobs where compassion might help. 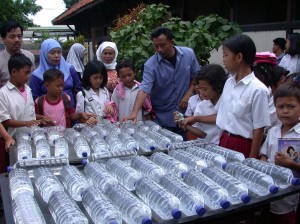 SODIS is a cheap method of disinfecting water by putting it in the sun. Like many things, it works better in physics than society, where its effects were not significant, according to a study in PLoS medicine recently. The technical barrier is that people don’t do it much. About thirty two percent of participants in the study used the system on a given day. If you’re familiar with how little things work in reality, this is still surprising. Cheaply disinfecting water seems like it would be a hit with poor people whose children get diarrhea all the time and regularly die. Rural Bolivia, where the study was done, is a good candidate. The children studied usually get diarrhoea four times a year, which causes about fifteen percent of deaths of children under five. For the poorest quintile in Bolivia the under five death rate is about one in ten of those born alive.

The leader of the study, Daniel Mausezahl, suspects a big reason for this is that lining up water bottles on your roof shows your neighbors that you aren’t rich enough to have more expensive methods of disinfecting water. It’s hard to see from a distance the difference between chlorination and coliform-infested jerry cans, so drinking excrement can make you look better than drinking cheap clean water.

Fascinating as signaling explanations are, this seems incredible. Having live descendents is even more evolutionarily handy than impressing associates. What other explanations could there be? Perhaps adults are skeptical about effectiveness? There is apparently good evidence it works though, and there were intensive promotional campaigns during the study. What’s more, lack of evidence doesn’t usually stop humans investing in just about anything that isn’t obviously lethal in the absence of effective means to control their wellbeing. And parents are known for obsessive interest in their children’s safety. What’s going on?