Aumann’s agreement theorem says that Bayesians with common priors who know one another’s posteriors must agree. There’s no apparent reason this shouldn’t apply to posteriors arrived at using indexical information. This does not mean that you and I should both believe we are as likely to be the author of this blog, but that we should agree on the chances that I am.

The Self-Sampling Assumption (SSA) does not allow for this agreement between people with different reference classes, as I shall demonstrate. Consider the figure below. Suppose A people and B people both begin with an equal prior over the two worlds. Everyone knows their type (A or B), but other than that they do not know their location. For instance an A person may be in any of eight places, as far as they know. A people consider their reference class to be A people only. B people consider their reference class to be B people only. The people who are standing next to each other in the diagram meet and exchange their knowledge. For instance an A person meeting a B person will learn that the B person is a B person, and that they don’t know anything much else. 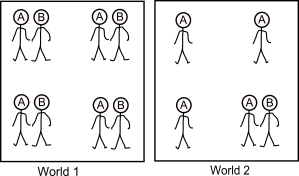 Suppose everyone uses SSA. When an A person and a B person meet, the A people come to think they are four times as likely to be in World 1. This is because in world two, only a quarter of A people meet a B person, whereas in world 1 they all do. The B people they meet cannot agree – in either world they expected to talk with an A person, and for that A person to be pretty sure they are in world 1. So despite knowing one another’s posteriors and having common priors over which world exists, the A and B people who meet must disagree. Not only on one another’s locations within the world, but over which world they are in*.

An example of this would be a husband and wife celebrating their wedding in a Chinese town with poor census data and an ongoing gender gap. The husband exclaims ‘wow, I am a husband! The disparity between gender populations in this town is probably smaller than I thought’. His wife expected in any case that she would end up with a husband who would make this inference from their marriage, and so cannot update and agree with him. Notice that neither partner need think the other has chosen the ‘wrong’ reference class in any way, it might be the reference class they would have chosen were they in that alternative indexical position.

In both of these cases the Self-Indication Assumption (SIA) allows for perfect agreement. Recall SIA weights the probability of worlds by the number of people in them in your situation. When A and B knowingly communicate, they are in symmetrical positions – either side of a communicating A and B pair. Both parties weight their hypotheses by the number of such pairs, and so they agree. Incidentally, when they first found out that they existed, and later when they learned their type, they did disagree. Communicating resolves this, instead of creating a disagreement as with SSA.

*If this does not seem bad enough, they each agree that the other person reasoned as well as they did.

This entry was posted in 1 and tagged Anthropics. Bookmark the permalink.

8 responses to “Agreement on anthropics”