Back to the original, titular purpose of this blog: getting excited about how things are metaphors for other things. Here are some things that are structurally similar in that they are games where you try to find structural similarities.

They also share the properties of being amusing to me and not generally known, so I thought I’d share them. I don’t know if they are generally amusing—if you try one, feel free to leave a comment about whether you enjoyed it or not.

This is a game I learned as a child. It goes like this:

Kate: [thinks of a thing] My thought is like –

Robert: the word of God

Kate: actually it was a palm tree

Sarah: Hmm, but Sam Smith is basically just like a palm tree. They are both tall, covered with a sparse brown fur, and appreciate dryness. Also, you’ve been thinking about them lately. Also, you are disproportionately interested in getting your hands on their nuts.

Robert: But palm trees are well known to symbolize the word of God. Probably because when you are lost in a metaphorical desert, God’s word guides you to the oasis of salvation. That’s why the faithful carry them on Palm Sunday.

Sarah: [thinks of a thing] My thought is like-

2. Crosswords where every clue points to two words that fit in the crossword

Really, making them is the game that most involves finding structural similarities in things—solving them involves the opposite.

For instance, what sentence could you use to describe either of these words at once?

CALVE and CARVE. Maybe, ‘an action that increases the matching items of cow you have’

LOADED and LOANED. ‘His family could drive a Tesla because it was ——‘

Here’s one I made earlier, but it’s not great. Here’s a famous crossword that probably inspired this activity indirectly.

One player asks for an explanation of some phenomenon. Others give answers that make the phenomenon largely about status. The first player chooses the best explanation. For warning, I made this game up and have not played it properly. Improper variants are amusing to me, but I’m not sure if to others.

Example: Why do we sleep?

Evolution bothered to develop eyes and ears and legs and flight or fight responses and the tendency to look around sharply if you hear something suspicious in large part because it is extremely dangerous to have no idea what is going on in your environment, and to not be able to run away from it. Yet after all this wariness, animals just shut down, paralyzed, and ignore everything for some large fraction of the time. If this seems potentially very costly, that’s because it is a kind of costly signaling.

One of the main threats to an animal is other animals of the same species. And an important way to fend off attacks from animals of the same species is to make and advertise social alliances. Sleep is a costly signal of having good social alliances. It shows that you trust that you won’t be killed, even if your own activities make it trivially easy to kill you. Looking relaxed and at ease is the universal signal that you believe your opponent would be insane to fight you, because you can beat them from a position of being relaxed and at ease. Being so relaxed that you wouldn’t even notice if you were in a fight is the universal signal that others have got your back.

Bananagrams is a game lots of people play. I think I made up the variant where you add constraints. e.g. each word has to rhyme with at least one other word in your grid, or all the words have to be verbs. The matching triplet constraint is that each word must be part of a triplet of words in your grid for which you can give an explanation for why they are basically similar. I think I haven’t actually tried this version with another person because I’ve run out of people in my immediate vicinity who are willing to play variants of bananagrams with me. This one seems somewhat harder than other variants, which are generally substantially harder than Bananagrams. 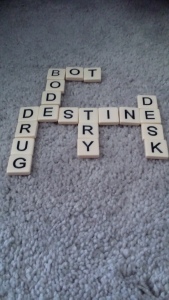 In progress game. If I had an opponent, they may not accept that ‘drug’, ‘bot’ and ‘desk’ are things that can make various online conversation partners less coherent. 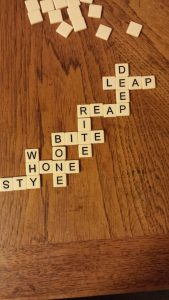 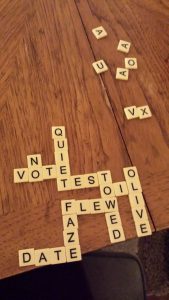 I forget what the constraint was here, but I think it was fun.

Codenames is a real game that basically involves trying to give someone a clue that points to four or five of twenty or so words another person is looking at, without cluing the rest. My friends and I like to play the game with Dixit cards instead of words. According to the internet we are not the first to think of this. 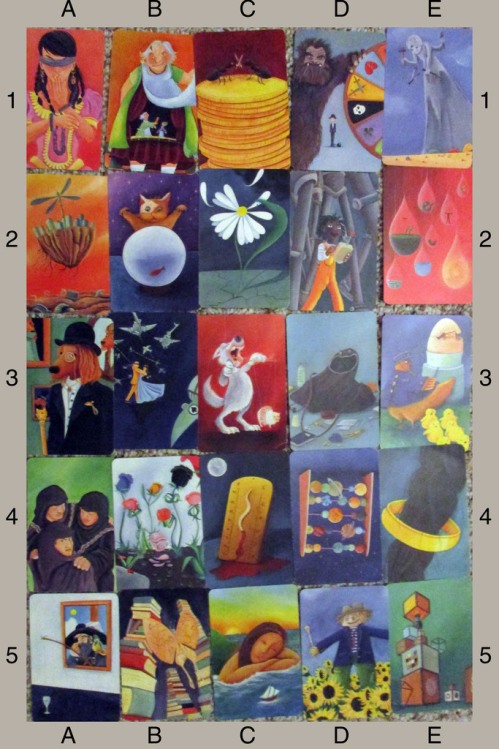 A Codenames grid made from Dixit cards. If you were by chance assigned to clue the first eight cards, you might say ‘sword 4’ and hope that 1B and 1E are more swordy than anything else around. I can’t think of anything really good to say here. Picture from Contigo at BoardGameGeek

Do you know any more good games for this list?

This entry was posted in 1. Bookmark the permalink.